After 31 years as a head boys basketball coach, 26 at Milwaukee Rufus King and the last five years at his alma mater, Dominican, Jim Gosz ’81 announced his retirement Tuesday afternoon.
Coach Gosz held a team meeting after school Tuesday to tell his team that the 2020-2021 season was his last.
“I knew after last year that this would be my last season,” Gosz said. “So, I had a year to prepare and I enjoyed every day knowing that there was light at the end of the tunnel. I began to appreciate everything more knowing it was my last year.”
“Coming from Rufus King, which was fantastic, coaching at Dominican was far better than I expected. I enjoyed the kids, coaches and administration. It’s just a great way to end.”
The announcement follows a historic run as a basketball coach, capped by earning his 600th career win on January 9, 2021, becoming the seventh boys basketball coach in the state’s history to reach that threshold.
Coach Gosz finishes with a career record of 606-145, 526-104 with Milwaukee King and 80-41 at Dominican, including WIAA Division 1 state titles in 1991, 1995, 2003 and 2004.
“To come to Dominican and to end it here, it’s just fitting. It’s time to move on. I’ll miss it, but I have zero regrets.”
Coach Gosz Announces Retirement2021-03-112021-08-10https://dominicanhighschool.com/wp-content/uploads/2018/09/horizontal-logo-light-background.pngDominican High Schoolhttps://dominicanhighschool.com/wp-content/uploads/2021/03/coach-gosz.jpg200px200px 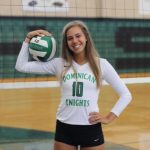